Hear me out. Wembley appeared unbeatable, but the new Tottenham Hotspur Stadium feels like the perfect blend of a number of stadiums on this list, a complete package. It has the full works, the full range of hospitality boxes and corporate suites to accommodate world events. It has a retractable pitch to reveal an artificial NFL playing surface beneath. It has spacious concourses and all the mod cons but most importantly, it boasts closeness to the pitch, a noise-reverberating roof and a Dortmund-esque stand that extends all the way from the pitch to the heavens. It is a stadium truly built for club football. Wembley is stunning, and could easily top this list, but the Tottenham Hotspur Stadium has a certain compactness and intimacy with the pitch. Everything about that stadium has been designed to cater to every single person in it, with no complaints or quarrels, everyone will be satisfied
Capacity:62,303
Location:London, UK Delayed? Yes. Overbudget? Oh, boy. Worth it? Absolutely. Wembley is an unbelievable arena to soak up football at every level. The views, no matter how high or far you sit away from the pitch, are tremendous, the ease of access, the concourses, the space and the enormity of the place all roll into one outstanding package. Initial controversy over whether to incorporate a fully retractable roof or the iconic, static arch seems foolish now the 133m curve towers over the ground, supporting the northern portion of the roof. It was an iconic project that is now recognisable around the globe. Wembley feels like the home of football and is starting to create history, with the next European Championship finals to be held there despite newer stadiums being constructed all the time. In 50 years, the place may not have aged a day.
Capacity:90,000
Location:London, UK Big. It’s really big. There is absolutely no excuse not to visit the Nou Camp before Lionel Messi’s career draws to a close. If you haven’t already, you should. If you already have, you should go again. The atmosphere doesn’t quite rock and roll like at other grounds, but if you’re there for the football on offer, the Nou Camp offers a stripped back magical experience. It’s due for a radical overhaul – featuring a roof and evening out of the currently lop-sided bowl – but for now, it’s the closest thing to the coliseum in Europe (barring, y’know, the actual coliseum). It’s both steep and sweeping, tall and wide. This stadium has seen things, man.
Capacity:99,354
Location:Barcelona, Spain The smallest on this list, but my word does it pack a punch. One side is smaller yet vertical, the other three quarters sweep around a curve in this Buenos Aires suburb like an artist’s paintbrush. From rugged concrete blocks to wooden seats, it’s a no frills affair, and the ground literally trembles beneath once the fans begin to bounce. It’s more a living, breathing organism than a stadium.
Capacity:49,000
Location:Buenos Aires, Argentina The Bernabeu feels like a tantalising blend of the old and the new. Its old-school, no frills charm remains in the perilously steep stands. It actually feels bigger than the Nou Camp in some respects because it’s built more like a traditional stadium. Picture the average Premier League ground, a relatively ordinary bowl with two tiers all the way around, fairly safe and standard… then place a duplicate directly on top. That’s the Bernabeu. It feels familiar and regular, but the size of the thing is eye-watering. A block dedicated to the
Capacity:81,044
Location:Madrid, Spain If we’re talking about nicest stadiums, the San Siro doesn’t come close. If we’re talking about top facilities, exquisite comfort and universally friendly angles, the San Siro doesn’t come close. If we’re talking about utterly terrifying, intimidating, daunting stadiums, San Siro takes the gold. It could well be the most threatening building you’ve ever seen from the outside, the spiralling walkways aren’t practical, but they’re stunning. The iconic red roof frames aren’t pretty, they’re scary. The whole thing looks like a chunk of a spaceship crash-landed in a Milanese suburb. The toilets consist of little more than concrete holes in the ground, nets prevent flares and other such objects from being fired onto the pitch and there are barely any light to illuminate the fans during night games. As an experience for watching football though, it’s pure drama, the aura of history palpable. The San Siro is due to be torn down to rebuild a sanitised, safe new-build, so get yourself to see the ruins before they go.
Capacity:80,018
Location:Milan, Italy The Allianz Arena is by no means an old stadium, but the exterior design was so far ahead of its time and continues to put most new-builds to shame. The glowing spaceship is a glorious sight in full daylight or at night, with an array of colours able to dance across it. Inside, the stadium is open and airy with masses of space for fans to roam freely about the concourses, while the arena itself provides stunning angles from every seat.
Capacity:75,024
Location:Munich, Germany 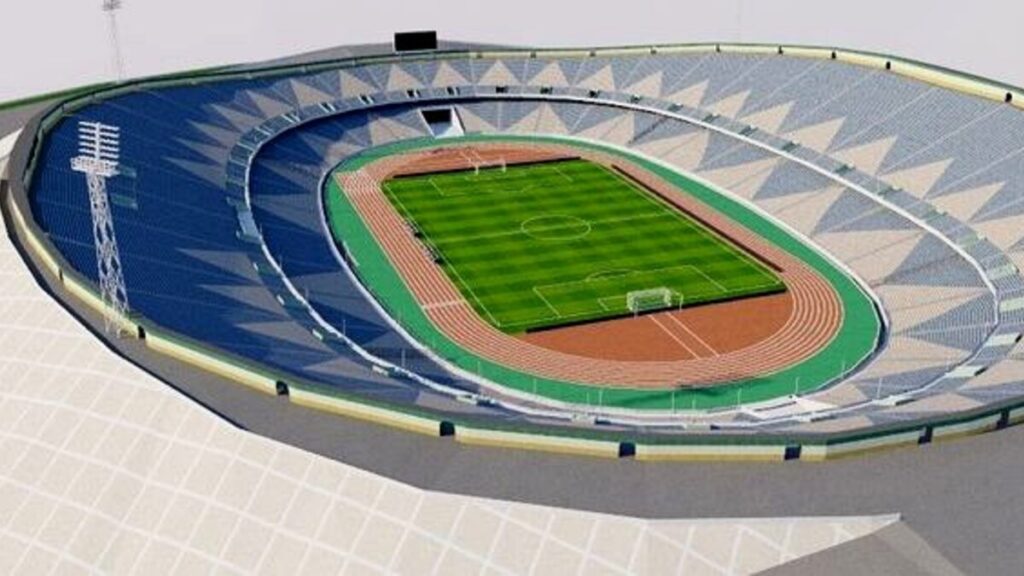 “Home to the Iran national football team, this stadium was unveiled in 1971. It has the capacity to carry approximately spectators.Furthermore, this huge complex now also houses other facilities such as a swimming pool. It now holds the tenth place among the best football stadiums in the world.”
Capacity:78,116
Location:Iran One of the most recent stadiums to be built on this list belongs to the noisy neighbours in Madrid. Atletico’s recent success has clawed them into the European elite, and now they have a stadium to boast about. The stadium is designed with fans in mind. You can find a superb view anywhere in the ground with zero restrictions, while the more enclosed roof keeps the noise bubbling away in the cauldron while still feeling light and airy.
Capacity:68,456
Location:Madrid, Spain 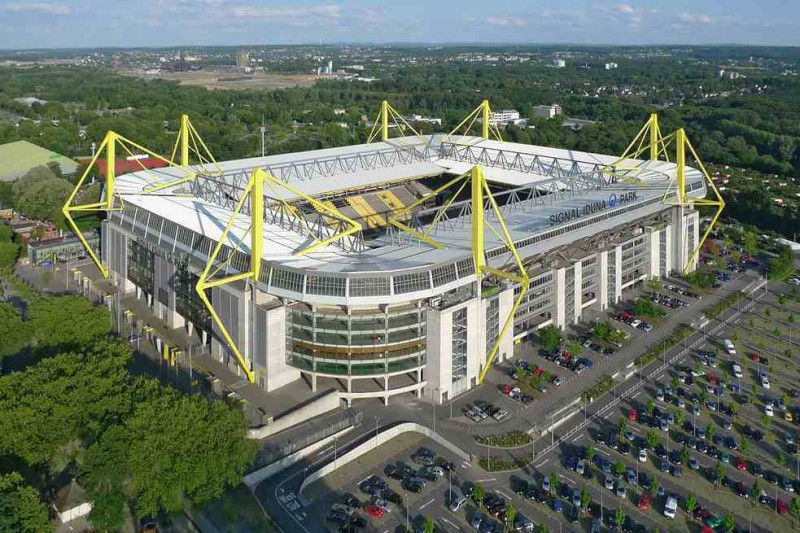 This deceptively large ground boasts the finest single stand in Europe, responsible for taking the breath away from millions around the world. From the outside, Westfalenstadion is a sharp, mechanical, industrial design, fairly standard but the South Stand’s capacity for 25,000 standing fans is a sight to behold. Twenty five thousand standing behind the short side of the pitch. It’s a pulsating experience, a giant connecting chain of shoulder rubs from the guy at the very back left to the front right. If you decide to trade your personal space for a European football pilgrimage like no other, you won’t regret it.
Capacity:81,365
Location:Dortmund, Germany The record attendance for the Maracanã is less than a thousand shy of 200,000 should tell you everything you need to know about this iconic pantheon of sport. Nestled in Rio, the stadium feels like a temple in a football-mad nation. It comprises of two complete rings stacked on top of each other, a perfect circle, and while that creates a gap between fans and the pitch, the atmosphere doesn’t escape.
Capacity:78,838
Rio de Janeiro, Brazil 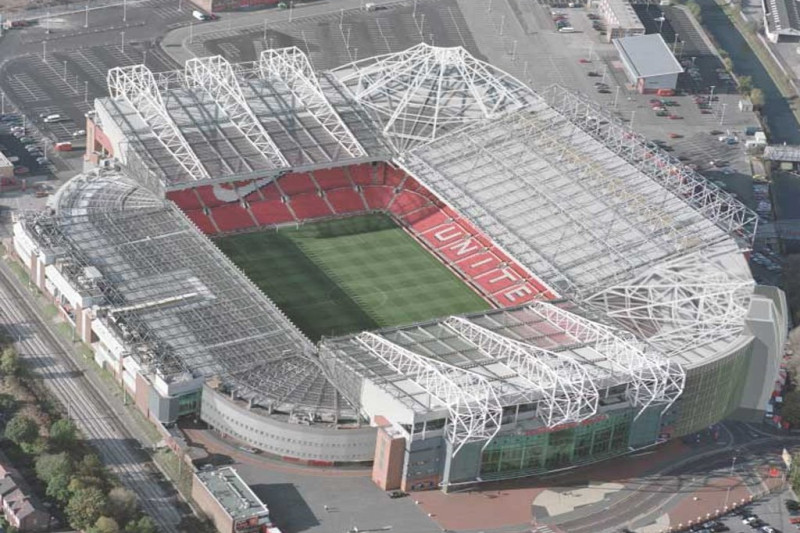 The UK’s largest club stadium isn’t referred to as The Theatre of Dreams without just cause. The ground has undergone several transformations since its opening but has retained its fear factor throughout the decades. A huge tick in the box for most British stadiums is the proximity to the pitch. While running tracks and large divides are commonplace across the world, Old Trafford manages to be both enormous and relatively compact with the pitch.
Capacity:74,879
Location:Manchester, UK This behemoth structure actually saw a considerable reduction in its capacity in 2016 following renovations that added additional hospitality suites and media facilities. It had previously topped 105,000 in terms of official seating capacity, but the fearsome size and name of the ground, rocking with passionate fans, has ensured the Azteca remains one of the most intimidating places to play the game.
Capacity:87,523
Location:Mexico City, Mexico

his one is made part of the top ten best football stadiums in the world mainly because it is home to Liverpool FC and has an electric environment that everyone would love to experience.
Capacity:53,394
Location:United Kingdom

“Initially known as the First National Bank Stadium, the Soccer City is located in Johannesburg and was built for the 2010 World Cup.Catering to a huge capacity of 90,000, this stadium is proof that South Africa is expanding in the sport. Truly, this one deserves its mention as one of the best football stadiums in the world.”
Capacity:94,736
Location:South Africa 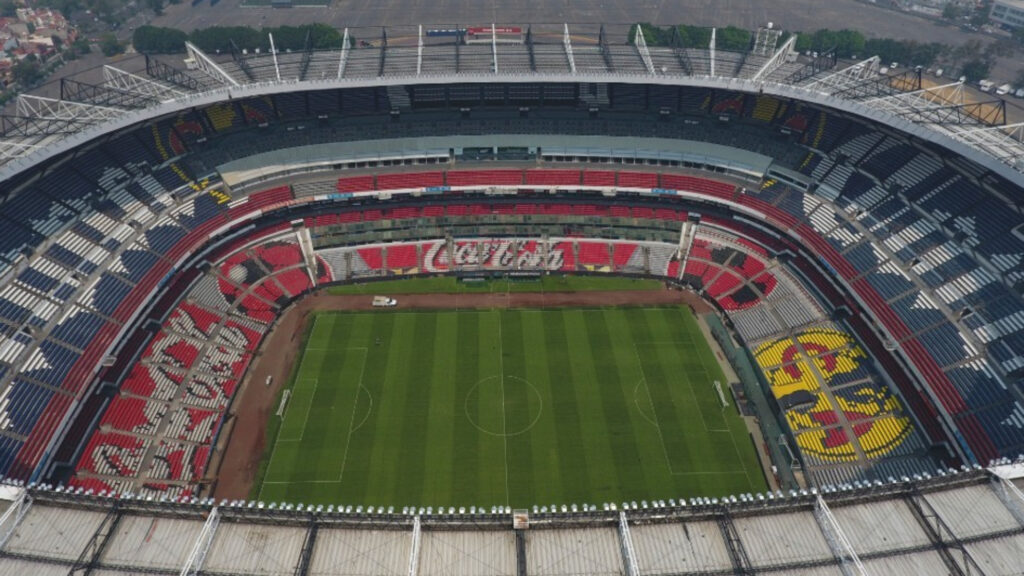 The sole reason why Azteca “Football Stadium” has been awarded a higher position in the top ten is due to the fact that the stadium has successfully hosted two World Cups finals and is best known for them.It now holds around 100,000 spectators and also has a special place in Mexican football
Capacity:87,523
Location:Mexico 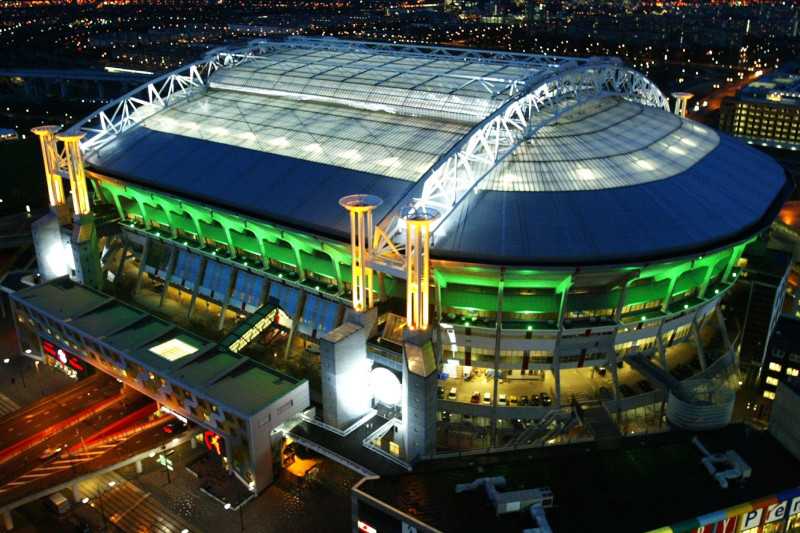 Home to one of Europe’s elite clubs, De Meer Stadion has had some of the world’s greatest footballers grace its turf. The likes of Johan Neeskens, Johnny Rep, Frank Rijkaard, Marco van Basten, Ronald Koeman and, of course, Johan Cruyff have all donned the famous red-and-white strip over the years.
Capacity:53,052
Location:Amsterdam 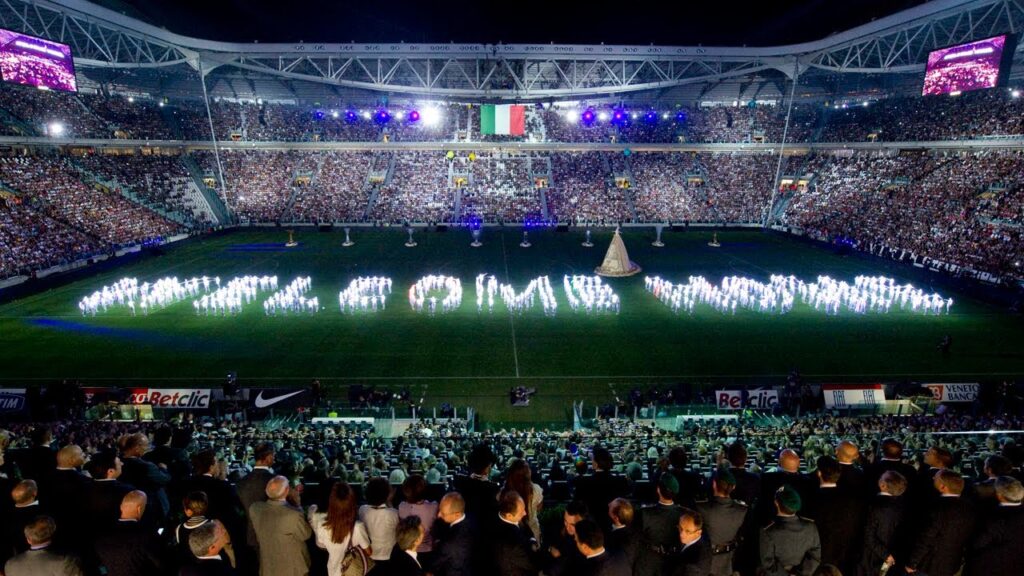 Although it’s by far the newest stadium on the list and has therefore not had the chance to secure a spot near the top, the Juventus Stadium still sits pretty high because of its incredible atmosphere and wonderful design.
Capacity:41,254
Location:Turin, Italy 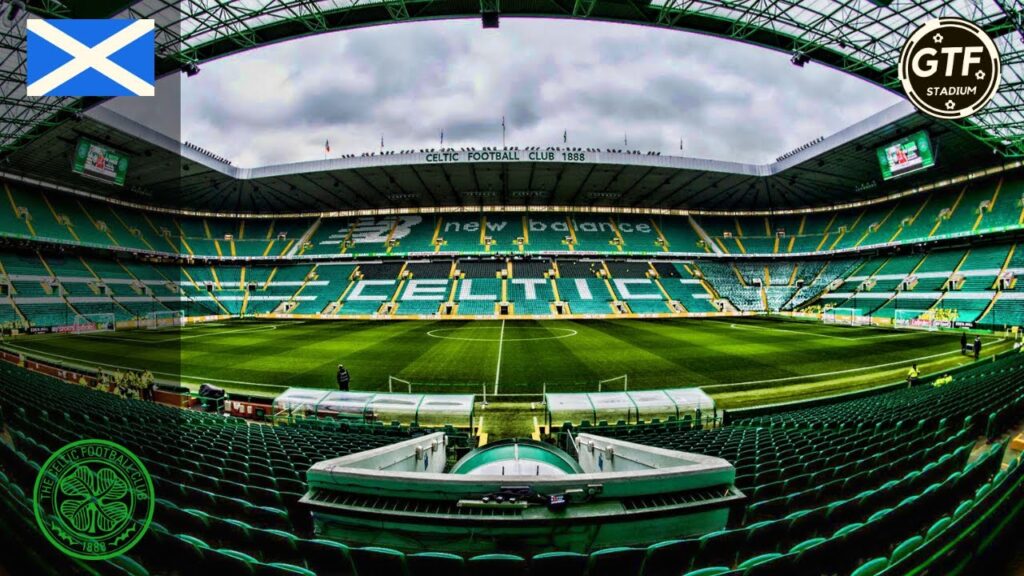 “Celtic Park is the oldest and largest stadium in Scotland and is a must-see for any football fan.
Celtic supporters are often referred to as some of the best in world football and are true appreciators of the game. Celtic Park is often at full capacity, regardless of the game’s importance—a testiment to the wonderful ground and wonderful fans”
Capacity:60,355
Location:Glasgow, Scotland